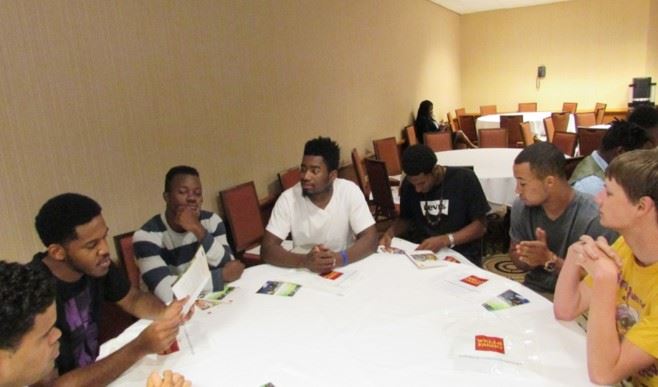 The Eddie Washington Center accepts men who have a sincere desire and motivation to change their lifestyle. Eligibility for the program is determined after an application is submitted, followed up by an interview with a case manager and documentation of their homelessness. Basic entry requirements include;

Other eligibility requirements are, they must present a negative TB test, proof of being fully vaccinated or a current negative Covid-19 test. Applicant cannot have a sexual office on their record, and they cannot be a recipient of SSI or SSDI Benefits.  Call 847-244-0805 for information or to initiate the intake process.

The Eddie Washington Center Graduation is held every year for those who successfully complete the 6-9-month program.

The graduation consists of past and current residents of the Eddie Washington Center as well as their families and inspirational guest speakers.

Waukegan Township Eddie Washington Center provides transitional housing and community enrichment services to homeless men. We strive to develop holistic case management which may include but not limited to monitoring daily activities, participating in work assignments, addressing daily living skills, receiving job counseling, and budget counseling. This process helps the resident align their goals with pursuing and achieving a true purpose and destiny. The Center works in empowerment partnership with other social service agencies that focus on issues identified by individual residents.

History of the Eddie Washington Center

The Eddie Washington Center has won various awards because of the uniqueness and creative ways of confronting the homeless issues in Lake County. The awards include a 1st place winner of the 1994 Governor's Hometown Award, the 1996 Lake County Affordable Housing Award Winner, recognition by “The Mary O’Brien Motivational Library” (1994-2000) and the “Liberty Bell Award” in 2020.

The Eddie Washington Center was named in memory of Milton E Staben (1919 to 1993) former Waukegan Township Supervisor and his son, Peter Staben (1944 to 1993). Both men dedicated their lives advocating for the rights and better conditions for the underprivileged in Lake County. On July 22, 2010, the Staben Center was renamed Eddie Washington Center. In honor of the late Illinois State Representative Eddie P. Washington, who passed away on June 5, 2010.

The Eddie Washington Center and 19th Judicial Circuit Specialty Courts (Drug, Veteran, and Mental Health court) have a healthy and mutually beneficial partnership. Which operates off a referral system that allows the EWC to maximize our services and provide assistance to men, individuals who otherwise may not have been helped.

With the spirit of "GIVING BACK," residents volunteer at various social service agencies and community activities i.e. snow removal and lawn care for area senior citizens. This process helps in developing a strong work ethic. EWC also “GIVES BACK” to the community through volunteering with local employers, churches, agencies and organizations.